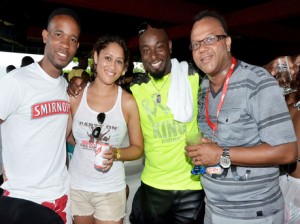 For months, Smirnoff and Dream Entertainment touted that ‘Xtreme Wet and Wild’ would carry a big bang, and they weren’t exaggerating.

It is possible that the Negril Kool Runnings Adventure Park venue where the event was staged is still in recovery mode after the onslaught of some 8,000 revellers last Sunday.

It is also obvious why the organisers removed the first letter ‘E’ from extreme, replacing it with ‘X’, which could easily have been interpreted ‘for adults only’, because of the intensity of the heat generated at this party. And it was not from the summer heat. Every one let down their hair and had fun abundantly.

Xtreme Wet and Wild was held on day three of the Smirnoff Dream Weekend, and this event was not for children or prudes. Every single aspect of this party was excessive – from the four big sounds operated by some of Kingston’s hottest

selectors, Chromatic, Coppershot, DJ Nicco and DJ Lank, to the high-powered water boys and girls whose job it was to ensure all patrons were soaking wet.

With ‘Drinking Right’ as the popular tag line, Smirnoff Vodka, Red Stripe beer, Moët & Chandon, Ting and Pepsi, flowed as if there was no tomorrow, under the tag line, ‘Right Age. Right Amount. Right Way’.

Having followed in the vein of Friday’s ultra high-energy beach party, ‘Beach Rave’ and ‘Twisted Spiritz’ and Saturday’s ‘Day Dreams’ and ‘Yush’, Xtreme didn’t have to do much to earn the number-one spot in the mix, according to the patrons.

The party journey continued straight into Sunday night with Beer Vibes hosted by Jazzy T from Renaissance, directing an onslaught of hardcore sounds from all around the world, including Unity from Japan, Redd Heat Sound out of New York, Dancehall Jugglerz from Germany, DJ Kentucky and the champion, Flava Unit from Portmore.