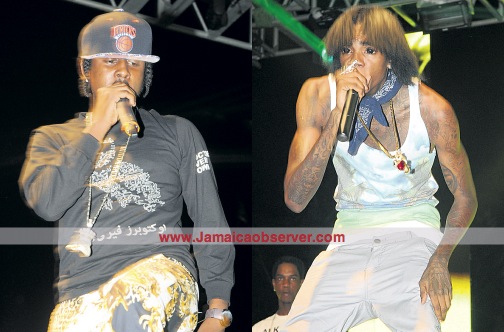 DANCEHALL artiste Popcaan had his audience’s undivided attention throughout his performance at Smirnoff Dream Live Concert at Cayenne Beach in Negril on Tuesday.

All it took was an introduction from the emcee for the more than 6,000 patrons to go wild. Starting off his set with When We Party, the deejay had those present reciting the lyrics in unison.

“Dream Weekend, uno say yaowww,” he commanded, to the obedient patrons. There was never a dull moment and all eyes were kept glued to the stage and the screams got louder when he performed other hits like Party Shot, Unruly, Gangster City and Dem Nuh Worry We.

Half-way through his set, he invited Canadian YouTube sensation Lucas Dipasquale, who did an accousitc version of Party Shot and Only Man She Want. The response was overwhelming. Popcaan joined in and performed the acoustic version of Get Gal Easy.

The dancehall act continued his set by delivering other singles like Feeling High, Back it Up and Only Man She Want.

Female dancehall artiste Spice was also a hit among patrons. The entertainer, who was celebrating her birthday, was serenaded by her fans between performing hits like Fight Ova Man, So Mi Like It, Like A Man, and Jim Screechy.

She also had a fluffy and skinny girl dance-off when she performed the single Fluffy Versus Slim.

There were mixed reactions to Alkaline’s performance. The screams were almost deafening when the tattooed eyes and straight-haired, controversial entertainer entered centre stage. Accompanied by three of his stone-faced entourage, the singjay got numerous ‘forwards’ and was a favourite for some females when he hurled out the lyrics to songs like Gone away, Purple Touch, 123, More than a Friend, Holiday Again, Live Life and Touch You. However, when he drew other tracks like the expletive-laced Scum Bag and the intro to Obeah, there were some complaints from the patrons in the VIP section.

“This is just too much. As soon as I start enjoying his performance he comes with these lyrics. I have to listen to each and every word before I can raise my hand in salute. Also what’s up with those guys behind him? I really don’t see what’s their reason for them being onstage,”