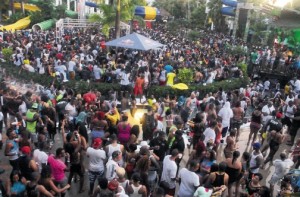 Patrons at one of the Independence weekend parties in Negril.

According to Sprint Financials Chief Executive Officer Christopher Barrett, party loans have been on the rise year over year from patrons attending the highly anticipated Appleton Temptation Isle (ATI) and Dream Weekend parties.

Barrett said that last year the company recorded $1.2 million in party loans for the same period.

These loans account for over 20 per cent of the company’s portfolio, he said, adding that the ceiling on party loans is $100,000 per customer.

While Barrett declined to disclose interest rates, he said that applicants usually have their loans approved the same day and have up to six months to repay.

“It’s mainly females, 21 to 35 years old, who come in for party loans. However, these persons do have a steady job, they’re just looking some extra money to spend,” he said.

Sprint Financials, which started out as a party loan company, has grown over the years and now offers financing for micro businesses, weddings, and personal loans.

Under the micro business portfolio, the company provides what it has termed microbiz and sprintbiz loans.

“The microbiz loan applies to any company that has five to eight employees, as one of the determining factors, while the sprintbiz loans are for companies that have fewer than five employees, such as bars and clothing stores,” Barrett told Caribbean Business Report.

Sprintbiz, Barrett explained, is an introductory loan giving borrowers up to $50,000 for six months. Collateral exceeding the loan amount should be provided and loan repayments are made weekly using Paymaster outlets.

Mandeville, according to Barrett, has recorded the second highest growth in micro business loans behind Kingston.

“I believe it’s because there is a lot more commercial activity going on in Mandeville, and for some reason, Mandeville’s payback rate is better than Kingston’s,” he explained.

His decision to open satellite offices is rooted in his belief that owning commercial real estate does not really add value to the company’s operations.

“My business uses a drive-through method; we come to you and do everything,” he said. “Having brick and mortar locations in this business is not necessary. Folks don’t have the time to come to you, stand in line, do an interview and other things.

“When we were using our offices, if we had 30 appointments in a day, only 10 persons would show up because they couldn’t find the time,” he added.

Having 21 agents completing 90 per cent of the loan process has not only saved the company 50 per cent in overhead costs, but allows for complete understanding of the client’s business, he explained

That strategy, he added, also increases the number of applicants to 300 per week.

Barrett said the company, which started operations in 2011, has more than doubled its client base over the last six months and is currently seeking venture capitalists to expand operations.

Sprint Financials is also hoping to be listed on the Stock Exchange as well as expand into Montego Bay, St James and Ocho Rios, St Ann next year.

“We are trying to do at least two parishes every year,” Barrett said “… and we would like to venture into a parish that has more farm lands.”

Patrons at one of the Independence weekend parties in Negril.