Dream Weekend closes on a high 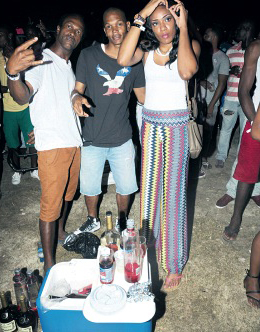 With their ‘igloos’ in tow, patrons party at the final event for Dream Weekend 2014.

Hundreds of patrons had already filed into the Cayenne Beach venue with their alcohol-stacked igloos by early evening. Throughout the night, while sipping on drink mixes, the partygoers jammed to the musical selections provided by members of Coppershot Disco, Road International, Macky and Gemini, and Dutty Dex. When the igloos ran out, the patrons kept the bar attendants busy as they flocked the bars for refills.

It was close to 1:00 am, when the Jamaica Observer team made its exit from the beach party which was in full swing.

“It was a great staging…I had a wonderful time as the food, music and the entire vibe was on par. However, probably next year, the promoters may want to provide a bit more shelter, just in case there are heavy rains again,” said Bristol resident Peter Washington.

Except for a few hiccups, which included overly packed venues, the Smirnoff Dream Weekend series had lived up to its patrons expectations. With delicious food, refreshing drink mixes coupled with great music and performances, the 2014 staging will remain fresh in the minds of local and international visitors for awhile.