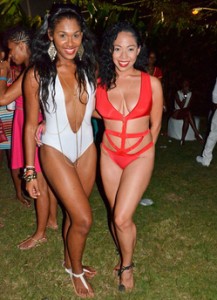 It may take Negril a year to recover from the Smirnoff Dream Weekend. Pockets of vendors, hoteliers, restaurateurs, taxi and bike operators are not likely to go dry any time soon.

The Bajan DJ made his supremacy known. His debut performance on the Dream Weekend stage left a long lasting impression on revelers.

On Saturday, the warlord, Bounty Killer, and Ghetto Story’s Baby Cham, took the event several notches up, staking their claim as champions of the dancehall. Their performance was watched by a massive crowd at Yush, the fourth official party of the Gleaner-sponsored event.

Four parties gone, including the popular Day Dreams with DJs Young Chow from Hot 97 in New York, Montego Bay’s Crazy Neil and Chromatic, there were six to go.

By Sunday afternoon, the gates at the Kool Runnings Adventure Park were flooded with patrons anxious to experience ‘Xtreme Wet and Wild’, the ultimate hedonistic fun-filled party. In its sixth year, this party proved to be the most exciting of the lot.

By 10 p.m., the same revelers, many making their second home at Hedonism II, were jamming to the juggling of Flava Unit, Redd Heat, Tony Matterhorn, DJ Kentucky, Unity from Japan and Jugglerz out of Germany at Wonderland.

This event was hosted by the man himself, Jazzy T.

As high-energy and electrifying as the events were, they never seemed to succeed in depleting the energy of those who travelled from as far as Samoa, Holland, Japan, South Africa, the USA, Canada, Kingston and nearby Montego Bay to the Capital of Casual.

By Monday, with two days to go and four parties outside the bag, it was time to don the red and white outfits for ‘Smirnoff Xclusive Celebrity Playground’, tagged a tremendous success by the organiser.

Held at too small a venue, Wavz Negril, which was hot and overly crowded, the event, hosted by Toronto-based deejay, Kardinal Offishall, saw patrons worshipping at his feet.

Best known for his 2008 hit song Dangerous, featuring American rapper, Akon, and his dancehall and hip-hop infused single, Tattoo, DJ Kardinal Offishall and his team of jugglers had the party under wraps of excitement.

Miami Jouvert, the Dream Live Concert and the Igloo Beach Flex and Lyme culminated a week of partying!!