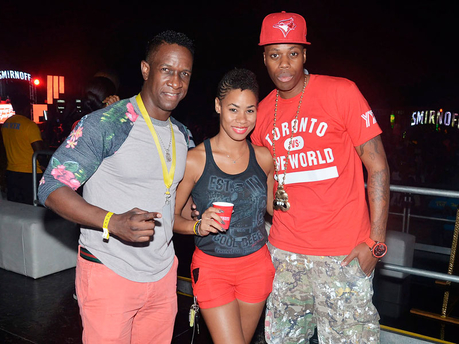 Simply put, Smirnoff Dream Weekend Xclusive Celebrity Playground was a blowout success, and anyone who was not among the revellers that crammed into Wavz Beach, Negril, for the bash on Monday evening would have missed out on one spectacular party!

Damion Crawford, minister of state in the Ministry of Tourism and Entertainment, led the list of celebrity sightings, with the warlord, Bounty Killer, making a surprise appearance to close the show which was hosted by Toronto-based deejay Kardinal Offishall. The DJ, who is best known for his 2008 hit song Dangerous, which features American rapper Akon, and more recently, his dancehall and hip hop-infused single, Tattoo, had the party brimming with loads of excitement, and then some.

Looking very dapper in white trousers and a white T-shirt covered by a blended red and gold vest and a red cap, the Kardinal, who was assisted by a group of friends, worked every inch of the stage, entertaining patrons with a number of his hit songs and trademark dance moves. His legion of fans responded with loud cheers and by prominently displaying Canadian flags throughout the venue. During his time on stage, Kardinal Offishall also paid tribute to incarcerated deejays Buju Banton and Vybz Kartel, telling patrons though they are no longer present in the dancehall, they are not forgotten.

Miami-based DJ, Dutty Dex, also spent some time on stage with the Kardinal, wowing fans with various hip hop hits, including Future’s Bugatti, which went down well with the partygoers. The DJ also chimed into varying topics of social commentary with patrons, above all, urging them to remain strong and enjoy the happiness of life, despite difficult times. To prove his point, he unleashed Pharrell Williams’ international mega hit, Happy, which was also very well received.

Radio disc jockeys Jazzy T and DJ Nicco were also in their element, rocking party animals with hit songs from the hip hop, dancehall and calypso genres. But it was DJ Nicco’s catalogue of Kartel songs that created the most buzz among the revellers, proving that despite the DJ’s absence from the dancehall, his songs are still vibrant on the party scene. Throughout the party, the festive patrons, all appropriately dressed for the red and white theme, drank to their hearts’ content from buckets containing champagne, wine and Hennessy.