MONTEGO BAY, St James – The Dream Entertainment group had its western Jamaica launch at Margaritaville in the resort city of Montego Bay last Thursday under the theme: ‘larger than life.’

The event attracted scores of patrons, creating a full house inside both levels of the club, as organisers vowed to make this year’s staging of the party series the best ever. 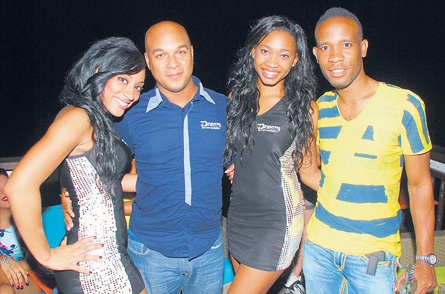 DJs Blue, Kentucky and Bass Odyssey handled the entertainment duties on the lower level of the facility, while DJs Rusty, Kamal Bankay and Crazy Neil kept patrons in party mode on the upper level. With Smirnoff mixes flowing freely on all levels, the energy inside the club never waned.

“I can’t wait to see what the numbers are like for Jamaican patrons this year, with so much interest around the launch parties and the fact that our bookings from overseas have doubled over last year,” remarked Ron Burke, Marketing Director, Dream Entertainment.

“We are bringing it bigger and better this year with more wow factors, the bulk of our events will be hosted by artistes such as Sizzla Kalonji, Mavado, Konshens, Bunji Garlin, RDX ……..”, added Burke.

Smirnoff Brand Manager Jermaine Bibbons explained that “Dream Weekend is an exciting platform, it is fun and it’s certainly not an ordinary event; it’s perfect for us to reach our consumers and Smirnoff identifies with these qualities.”

“At Smirnoff Dream Weekend this year we are having the official launch of our new flavour ‘Red Berry Crush’ which was built in time for the event, new Smirnoff mixes and on top of that some wow moments to be unleashed at every event that will leave patrons with an unforgettable mark on their minds from the Smirnoff brand,” he added.

The party series will run from August 1-6 in Negril.