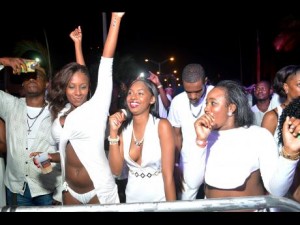 IF THE Dream Week launch party was anything to go by, then this year’s installation of the highly anticipated party series is bound to be epic.

Donning their all-white ensemble, scores of patrons descended on Kingston’s waterfront to witness the launch of one of Jamaica’s hottest summer party series, and they were not disappointed as the ‘Dream team’ and new partners J. Wray & Nephew put on a show many will be talking about for years to come.

Bigger and better are the only terms to describe what took place on Sunday at the waterfront. So different was this launch that one almost forgot that it was. The formalities were replaced by a huge stage with a sound system blasting a wide selection of dancehall and soca hits, courtesy of selector Badda Bling. And if patrons were not sold on the ultimate party experience at the end of his time at the turntables, the Dream promoters later turned it up another notch.

A number of artistes set to perform at this year’s Dream Week of parties gave patrons a preview of what to expect in Negril this summer, and they soaked up every minute of it. From the moment Chi Ching Ching graced the stage to the minute Busy Signal closed out the performances, it was non-stop energy. The former had the crowd in a frenzy. His numerous dance hits were obvious favourites as patrons danced up a storm inside the venue.

With so much partying going on, many forgot that it was Father’s Day, but the Way Up, Stay Up artiste made sure to remind patrons. Bringing his dad to the stage, Chi Ching paid tribute to the man he said was responsible for the person he has become, a tribute the audience appreciated. Blanks were fired into the night sky, as the Kingston waterfront saluted fathers everywhere.

After demonstrating how to Watchi Wiya, Chi Ching made way for Ding Dong. He too delivered some of his most popular dance tracks before calling on the King of the Dancehall himself to give a brief performance, much to the delight of the crowd.

From the King of the Dancehall to the ‘queen’ herself, Lady Saw later graced the stage for her performance, and in true ‘Mumma Saw’ fashion, the deejay relinquished herself of her wig as she delivered some of her hits. So good was her short performance that patrons called for more. However, the queen insisted that more was to come in Negril in August.

Busy Signal was the night’s final act and he, too, gave a strong performance. When the party came to a close at 10:30 p.m., it was clear that patrons were not ready to go home as they took their own sweet time in leaving the venue.