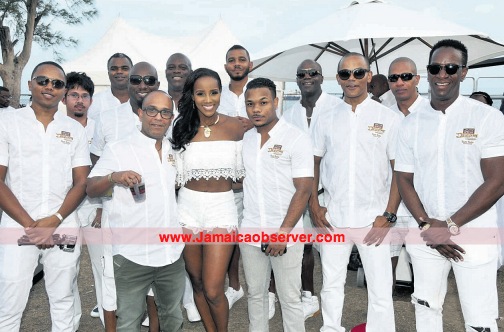 THE streets leading to downtown Kingston’s Waterfront were packed for the launch of the 2015 Appleton Special Dream Weekend Rum Rules Paradise, which took the form of an all-white cooler party held on Sunday night.

“We will have buses from all the major population centres islandwide to shuttle patrons to Negril,” Scott Dunn, managing director of Dream Entertainment, told the massive audience.

On the huge stage, accentuated with large video screens and massive spotlights, Tamika West, marketing manager – dark spirits at J Wray & Nephew, revealed the eight beauties which will play a promotional role at Dream Weekend as the Appleton Special Forces.

“As the largest and most attended party series in the Caribbean, we encourage Appleton Special Dream Weekend patrons to drink responsibly as they enjoy their special moments,” she said.

Scheduled for August 5 to 8, Appleton Special Dream Weekend will see 10 events over the five days.

West then turned over the proceedings to a strong line-up of musical stars.

Chi Ching Ching was the first to hit the stage getting the crowd going with his dance-friendly songs such as Watch The Wire, and Stay Up Way Up. Ding Dong followed the appropriate Holiday. He quickly brought Beenie Man in for a light-hearted dance off with his daughter Desha ‘Crystal’ Davis. Beenie stayed for a while quickly running through a small sample of his extensive catalogue of songs before handing things back to Ding Dong.

There was no pause as Lady Saw, waiting in the wings, graced the stage next to the cheers from the ladies in the audience. Ever the consummate entertainer, she responded heading into ‘raw’ territory shedding her heels and wig to belt out a string of her ‘woman-power’ infused hit songs.

Busy Signal closed out the live performances also delivering with his newest song Text Message and old favourites like Nah Go Jail Again. The event then continued into the night under the guidance of Flava Unit, Coppershot, Chromatic and DJ Nicco.